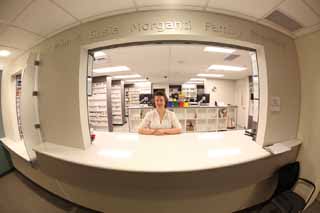 Northwest Kidney Centers has opened Haviland Pavilion, a kidney resource center in a refurbished building at 700 Broadway in Seattle. The $8 million project includes an expanded pharmacy, an updated 15-station dialysis clinic, upgraded infrastructure, and a research center so Kidney Research Institute investigators can work with patients.

It purchased the 40,000-square-foot building in 1978. Donors contributed nearly $1.7 million to help pay for the rehab, which reduces by half the energy costs of the old space. Puget Sound Energy contributed a $250,000 grant.

The space has a great room with fireplace and outdoor deck.

In the research suite, investigators and staff can meet privately with patients. The laboratory is nearby at Harborview Medical Center.

The center now has a demonstration kitchen for classes on nutrition and cooking.

The building also has a new water filtration system that purifies tap water to make fluid for treatments.

An exhibit displays photographs and dialyzers and kidney machines dating back more than 50 years, so people can see the evolution of hemodialysis and peritoneal dialysis technology.

One of the machines on display is a Mini Monster, or Mini-I, a machine created in 1964 at the University of Washington for the world’s first home-dialysis patient. The Mini-I was the prototype for most single-patient hemodialysis machines in use today.

The museum area is open for self-guided tours during business hours.

Are you maximizing your real estate tax benefits?

Back to all news
Customer Login   Employee Login
© 2021 MacDonald-Miller. All rights reserved.